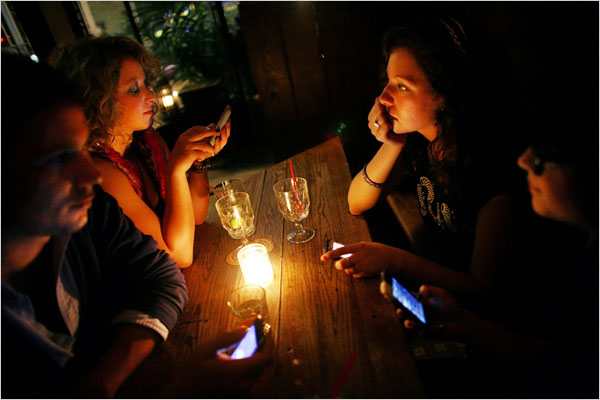 Emily Woolf, far right, uses the site Foursquare, which is available in 31 American cities, to find her friends when she wants to meet.


But for many urbanites in their 20s and 30s, two other questions are just as important: Where are you, and can I come join you?

For them, a fast-growing social networking service called Foursquare is becoming the tool of choice. A combination of friend-finder, city guide and competitive bar game, Foursquare lets users “check in” with a cellphone at a bar, restaurant or art gallery. That alerts their friends to their current location so they can drop by and say hello.

“It’s planned serendipity,” said Emily Woolf, 24, a strategic planner living in Brooklyn who checks in on Foursquare when she wants to grab coffee or a drink with friends. “At this point, I don’t even bother texting or calling my friends. I just check Foursquare to see if they’re nearby and go meet them.”

Just seven months old with about 60,000 users so far, Foursquare is still getting off the ground — especially when compared with supersize services like Facebook and Twitter, which have millions of members. But that underground status is part of Foursquare’s appeal, its fans say. It is not yet cluttered with celebrities, nosy mothers-in-law or annoying co-workers.

“On Twitter, there are more than 3,000 people that follow me, and Facebook is more of a business community now,” said Annie Heckenberger, 36, who works at an advertising agency in Philadelphia. “Foursquare is more of the people that I actually hang out with and want to socialize with.”

It is akin to knowing about a hip new club before everyone else, said Deborah Schultz, an analyst with the Altimeter Group who specializes in trends in social media.

“There will always be people who love new technology and want to test it out, kick the tires,” she said. “Once those services become too big and the bridge-and-tunnel crowd shows up, they can lose some of that initial interest.”

One factor that might help Foursquare retain its intimate feel is that most of its members are picky about who can see the real-time footprints that they are leaving across the cities in which they live.

Foursquare emerged from the ashes of an earlier mobile service called Dodgeball, which was introduced in 2004 by Dennis Crowley and a classmate from New York University and was sold to Google in 2005.

After Google killed the service, which relied heavily on text messages, Mr. Crowley revived the concept. He and his business partner, Naveen Selvadurai, introduced Foursquare in March during South by Southwest, an annual technology and music conference that draws media types, Internet entrepreneurs and technology fans.

Other companies, like BrightKite, Loopt and Google Latitude, are also offering services aimed at helping friends find each other on the go. But Foursquare has attracted more attention than the others, in part because it incorporates elements of gaming and social competition.

The system awards points and virtual badges to players depending on how often they go out and which places they visit. Users who frequent a particular place enough times are crowned “mayor” of that particular location.

Ms. Heckenberger says she once even leapt out of bed to reclaim the title at her local watering hole, the Swift Half Pub, where another player had briefly wrested away the honor. “Foursquare has become like an obsession for me,” she said.

So far, Foursquare has no revenue, and the company is still developing its business model. Mr. Crowley and Mr. Selvadurai say they are focusing on trying to build up the infrastructure, expand the user base and develop a database of locations. They see the service as developing beyond a nightlife game into a “service that encourages people to do new things and get rewarded,” Mr. Crowley said.

Foursquare is available in 31 cities in the United States, including New York, Chicago, San Francisco, Boston and Washington. The service is also operating in London, Amsterdam and three Canadian cities.

Mr. Crowley said the fierce competition of Foursquare players to claim the mayorship of their favorite haunts suggested that corporate sponsorships could be a lucrative source of revenue. Some small businesses, like Sugar Mama’s Bake Shop in Austin, Tex., are starting to advertise special deals on the service, although Mr. Crowley has yet to begin charging businesses to put deals in the database.

“For a small business with a limited advertising budget, it’s a great way to promote ourselves,” said Olivia O’Neal, owner of Sugar Mama’s. The shop offers Foursquare mayors a free cup of coffee each time they come in, and regular patrons receive their 10th cupcake free. “There are about 67 people currently working on those offers, and for a small family-owned business like ours, that’s a really big number,” Ms. O’Neal said.

Eventually, Mr. Crowley said, he would like to work with businesses on sponsored badges. For example, Starbucks might agree to give a player who visits 10 different Starbucks locations in a week a special badge and a free coffee drink.

Foursquare’s potential has intrigued some notable entrepreneurs and investors. In September, the company landed a $1.35 million round of venture financing, led by Union Square Ventures, which previously backed Twitter and Meetup.

Also contributing to the financing round were Kevin Rose, founder of the social news site Digg; Jack Dorsey, co-founder of Twitter; and Ron Conway, an angel investor who had backed Google and PayPal.

“Being the hot new thing is a factor, but that’s not totally the driving force behind Foursquare,” said Fred Wilson, general partner at Union Square Ventures. “There’s a part of it that’s just fun, and you can’t ignore how important that is in terms of usage.”